That said, we and our Coaches often get asked about our recommended best practices for various tools and features, which prompted us to take a look at the CRM’s default system values. Two of the biggest stand-out areas of opportunity we recognized from this review were the lead Status and lead Urgency fields.

We set out researching industry best practices, interviewing customers, and talking to our Coaches so that we could better understand how to improve the CRM’s default Statuses and Urgencies. One survey we ran amongst a group of Real Geeks users revealed:

Only 36.8% of respondents consistently set Statuses for every lead, while a full 35% never touched Statuses at all

Among those not using the Lead Status field (either regularly or at all), 65% didn’t do so because they didn’t understand what the Status was for or why they should use it

Our conversations with real estate experts further impressed on us over and over again how important the Status is as a prioritization tool for telling the agent where the lead currently is in the sales pipeline. Additionally, the Urgency field should make clear how frequently the agent should contact that lead. With this focus in mind, we targeted the most critical changes we needed to make:

Last Fall, we took step one by updating the CRM’s Leads List table to include the lead Status. The response was immediate–before we even posted about the change ourselves, customers were commenting on the improvement. From there, the next step was to map out what the new system values should be and to make sure they were structured in the right order. Our research and the advice of top producers, such as Greg Harrelson, led us to define the Status pathway as:

After coding this new Status structure into the CRM, we then turned our attention to solving the challenge of keeping each lead’s status updated. If the agent was having to take the time to make every update for every lead, that’s a lot of time taken away from actually nurturing lead relationships and helping them to progress toward closing. As such, we wanted to make sure that the platform was doing as much of the work as possible with regard to the administrative tasks of record-keeping.

Our solution was to set up a new set of background logic in the CRM that would automatically update a lead’s Status based on other actions taken either by the agent or by the lead. For example, any new lead coming in would start out as "New", but would then be changed to “Attempted Contact” once the agent logged an outgoing call, text, chat, or email. If the lead responded, the Status would again automatically advance to “Nurture” until an appointment was set, and so on all the way to “Closed”. 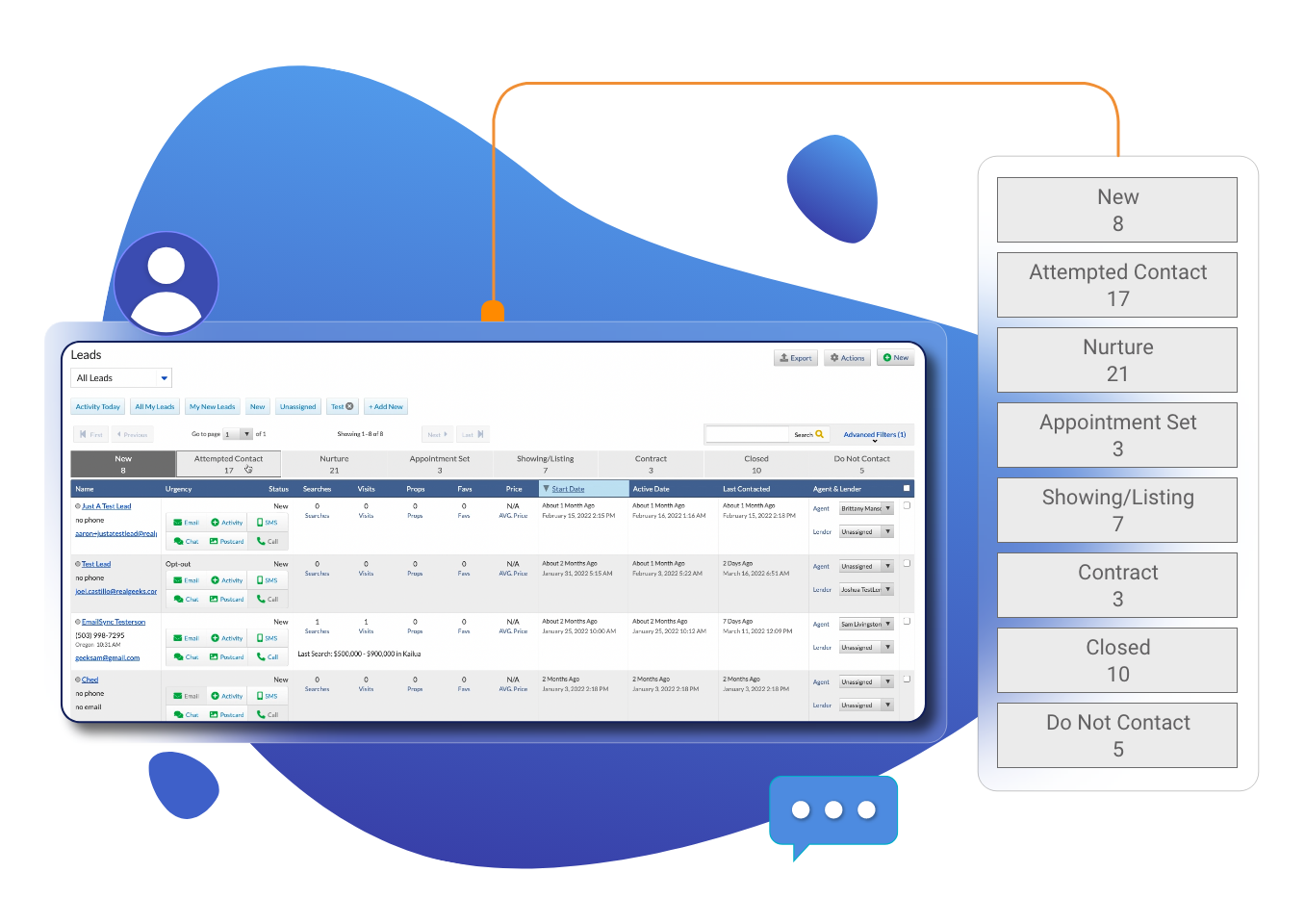 Finally, we wanted to give these new system Statuses very prominent visibility in the CRM. Our Coaches and experts had stressed how important tracking the lead’s status is, so we knew we needed to show at a glance what an individual lead’s Status was and also show how many leads were currently in each stage.

The solution here was the all-new Status Bar, which rests just above the Leads List table. Agents will be able to quickly visualize the distribution of clients throughout their sales pipeline. Moreover, this tool enables agents to filter down to the leads within a particular stage so that they can prioritize whom they help advance toward closing. 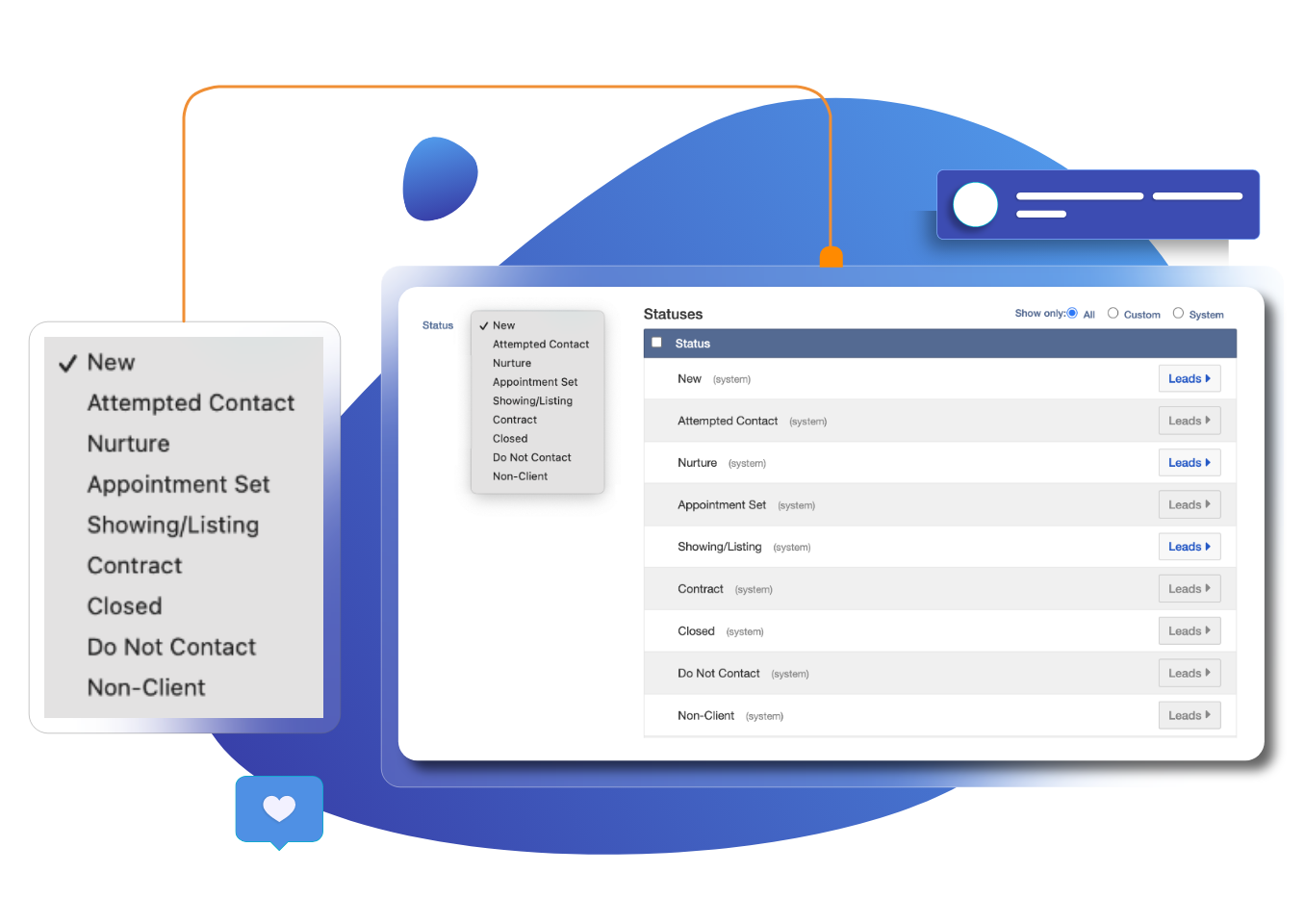 Development wrapped earlier this year and we began beta testing in March. Along with making these new features available by default to all new Real Geeks customers, we also recruited a group of approximately 50 current users to try everything out and provide their feedback. Their response was overwhelmingly positive, sharing comments such as:

One of the best lead generation and management systems available. A fully integrated custom IDX and marketing solution to drive traffic, capture leads, manage-cultivate them and close more transactions.

Jump to a section Jump to:

You don't have to take our word for it! We encourage you to do your research and talk to our customers to see why they chose to go with our solution.

Keeping It Real: The Resources To Equip Your Real Estate Team for Success with Sascha Chatman

Keeping It Real: The Resources To Equip Your Real Estate Team for Success

In this episode of Keeping it Real, Sascha Chatman and  Frank Klesitz, CEO of Vyral Marketing, break down how you can equip your real estate team for success.

Learn more about the resources needed to manage your own team of real estate agents. Of course, a capable workforce is one thing for generating leads and obtaining success in the real estate world. However, having the right resources available is one of the critical factors needed to equip your real estate team for success.

Transforming Your Success into Their Success

Buying this Year vs Next Year

The discovery phase is meant to determine whether or not the agents being recruited are the right fit for their real estate team while providing the necessary details for the agents to know what their team is about. Sascha first discusses their team goals and strategies to ensure agents know exactly what they're walking into. He also discusses other matters, such as expectations from the agents themselves and their commissions.

The discovery phase may be one of the most important parts of knowing how to equip your real estate team for success. In order to succeed, you need to have a reliable workforce on your side that shares the same goals and is willing to cooperate with the rest of the team to move forward. Having a compatible and efficient team is one of the best resources you can have in real estate, as it can significantly affect your business' productivity.

Ad Educated Buyer is Easier to Work with!

This is the highlight of the entire video. Sascha compares his utility belt of resources to Batman's belt of tools and trinkets. This belt essentially exists to store all resources and keep them within reach. Don't get the wrong idea, though. It's not an actual belt. Instead, it is usually a cloud or a compilation of all your valuable resources, such as videos, links, and other agent tools. Having a utility belt that is curated specifically for your team and your needs could help increase the productivity of your workflow because you won't have to scavenge for resources when you need them.

Not only does it make you more productive within your workplace, but it also gives off the sense that you are reliable and organized. When clients ask for something, you will easily have it within reach.

Clients understandably have many questions before closing the deal, so one of the best ways to answer them is to grab a resource from your utility belt. For example, you're talking to a client about title insurance. Instead of answering their questions yourself, you could take an informative video from your utility belt and ask them to watch it. This makes it easier to understand and relate to.

Having a utility belt is a great way to equip your real estate team for success. It also comes in useful during business transactions. All in all, it's one of the best resources that a real estate team can have.

Having the right resources is essential in equipping your real estate team for success. Create an agent utility belt that caters to your team by signing up for the Real Geeks platform today. We provide valuable resources that you and your team can use to achieve the best possible outcome in every situation. Get started with us today!

We will email you info about Real Geeks & live training events.